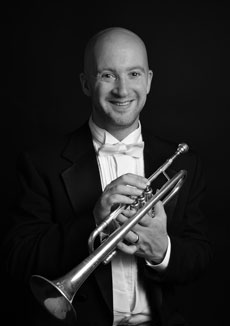 Adam Luftman joined the San Francisco Opera Orchestra as the principal Trumpet in 2007. Originally from Longmeadow, Massachusetts, he also holds the position of principal trumpet in the San Francisco Ballet Orchestra. Prior to moving to San Francisco, Luftman held positions with the Baltimore Symphony, the New World Symphony in Miami, and the Civic Orchestra of Chicago. He has also been a guest artist with many of the country's finest orchestras, including the Cleveland Orchestra, Philadelphia Orchestra, Chicago Symphony and San Francisco Symphony. He has also enjoyed touring and recording with many of these ensembles.

In addition to his orchestral work, Luftman has been a featured soloist with numerous groups. He is also a member of The Bay Brass and San Francisco Contemporary Music Players as well as being an avid jazz musician. Luftman recently performed and recorded as a member of the National Brass Ensemble, a group comprised of principal musicians from the nation's top orchestras.

He also can be heard on recordings with the Philadelphia Orchestra, San Francisco Symphony, Baltimore Symphony, ESPN Sunday Night Football, as well as many movie and video game soundtracks recorded at Skywalker Ranch in CA.