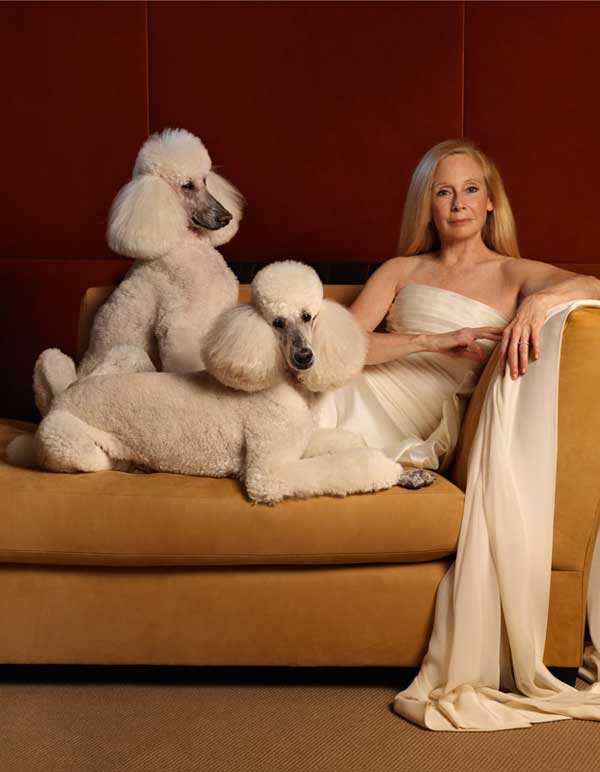 Karen LeFrak is an author, composer, and philanthropic New Yorker.

Her involvement in the arts as a composer and board member of the New York Philharmonic made her the perfect fit to introduce children to the worlds of music and dance in her first two children’s books, Jake the Philharmonic Dog and Jake the Ballet Dog. Next, in Best in Show, LeFrak shared another part of her life; for over 20 years, she has raised Standard Poodles and bred many champions. LeFrak’s most recent book Sleepover at the Museum (Crown Books for Young Readers, January 2019) invites children into a natural history museum to discover its treasures, as they solve riddles leading them through its various halls at a birthday celebration with a scavenger hunt and sleepover.

When her writing career launched, LeFrak also began composing music, inspired by her passion for classical piano, an interest since childhood. She has created piano miniatures and a number of orchestral, chamber, quartets, duets, solo works, and compositions commissioned by the New York Philharmonic, the Miami Symphony, and the Youth American Grand Prix, as well as ballet scores for the Joffrey Ballet and scores commissioned by American Ballet Theatre and New York Theatre Ballet. Her music compositions have been performed at prestigious venues in the United States, Europe, Russia, and Asia, including the White House, Avery Fisher Hall at Lincoln Center, Moscow’s Kremlin for the 250th anniversary of the Bolshoi Ballet School, Shanghai Symphony Orchestra’s Chamber Music Hall, and the new Concert Hall of the Mariinsky Theatre in Saint Petersburg, Russia, among many other venues. Her scores have been recorded by the St. Petersburg Chamber Philharmonic, the Mariinsky Orchestra, and by the Gloriosa Trio on Colorado Public Radio.

LeFrak’s narrated children’s score Sleepover at the Museum, orchestrated by Bill Ross, will receive its world premiere by the Miami Symphony on February 24, 2019 and a California premiere at Festival Napa Valley in July of 2019. It will also be performed at the Boca Raton Music Festival later in 2019. The New York Philharmonic will perform her Sleepover at the Museum Suite in early March of 2020.

Recently featured in Good Housekeeping’s 10 Amazing Women In The Arts Over 50, she is a Director of the New York Philharmonic where she serves as the chairman of the Music Policy Committee and is on the Executive Committee. She was also recently appointed to serve on the board of the Kennedy Center. She is on the President’s Council of the society of Memorial Sloan-Kettering and has served on the New York State Council on the Arts and as President of the Women’s Committee of the Central Park Conservancy. In 2010, in recognition of outstanding achievement, Hunter College Alumni Association elected LeFrak to the Hunter College Hall of Fame. A magna cum laude graduate of Mt. Holyoke College, she continued her education earning an MA in Music History from Hunter College.

Karen is married to Richard LeFrak, president of the LeFrak Organization, one of the world’s largest land development and building firms. They currently reside in Manhattan, Southampton, and Miami and have two sons, four grandchildren, and a pair of Standard Poodles. For more information, please visit karenlefrak.com and for Karen’s music, visit karenlefrakmusic.com.