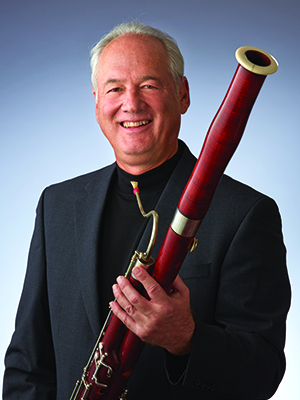 John Wetherill, is a native of Philadelphia. His major teachers were John Shamlian, and Sol Schoenbach, who was his teacher while at the Curtis Institute of Music. He has held Principal positions with the Honolulu Symphony, the Ensemble Intercontemporain, the Denver Symphony, the Colorado Symphony and the Indianapolis Symphony Orchestra. Wetherill has also performed with the Metropolitan Opera Orchestra, the Orchestre de Paris,  Radio France and the Pittsburgh Symphony. He can be heard on numerous recordings of the chamber works of Stravinsky and Schoenberg made under the direction of Pierre Boulez, and recordings of the Denver Symphony under the direction of Philippe Entremont.

Wetherill has performed with Lake Tahoe and CityMusic Cleveland. As an educator, he has taught at the University of Colorado, given Master Classes at Ball State and Butler University and the Glickman Popkin Bassoon Camp in North Carolina. Wetherill was a 2011-2012 winner of a Creative Renewal grant from the Indianapolis Arts Council. Outside of music, John's interests include tennis and golf.