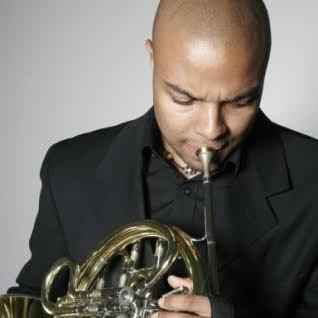 Hailed as "stunning and assured" (The New York Times), Atlanta native, hornist David Byrd-Marrow is a member of the International Contemporary Ensemble and the Knights. Working with a uniquely wide range of performers, he has premiered works by artists ranging from George Lewis to Chick Corea.

Byrd-Marrow has performed at festivals including the Ojai Music Festival, Bay Chamber Concerts, Mostly Mozart Festival, and Tanglewood Music Center, and he has served as a faculty member at the Banff Music Centre. Formerly a member of Carnegie Hall's Ensemble Connect, he has made appearances with the New York Philharmonic, Decoda, the Atlanta and Tokyo symphony orchestras, the Orpheus Chamber Orchestra, the Mostly Mozart Festival Orchestra, the Washington National Opera, and the Chamber Music Society of Lincoln Center. On Broadway, David most recently was in the orchestra for the musical Carousel, starring Joshua Henry and Renee Fleming. He has recorded on many labels including Tundra, More Is More, Nonesuch, EMI, Deutsche Grammophon, and Naxos.

Byrd-Marrow is currently an assistant professor of horn at the Lamont School of Music at the University of Denver. He received his Bachelor of Music degree from the Juilliard School and Master of Music from Stony Brook University.