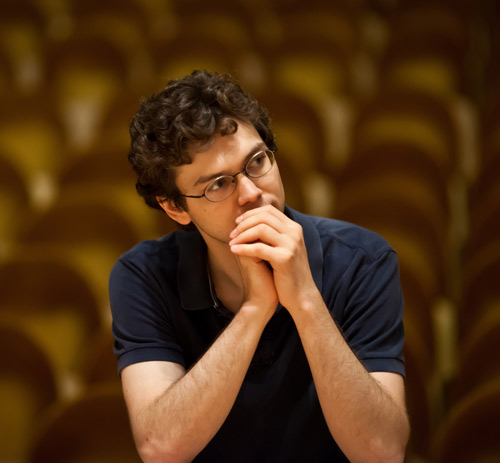 Conductor Andrey Rubtsov was born in Moscow. In 2011 he graduated with top honors from the Royal Academy of Music. Andrey Rubtsov was an assistant to Donald Runnicles at BBC Scottish Symphony Orchestra 2014-16 as well as Leverhulme Conducting Fellow at the Royal Conservatoire of Scotland. The Fellowship granted him opportunities to work many times with the Scottish Opera, RSNO and Red Note Ensemble.

Andrey first came to public attention when he conducted two piano concertos by J.S. Bach, with the Russian National Orchestra and Mikhail Pletnev as a soloist in 2004. This was followed by concerts with RNO in Malaysia, Russia, Netherlands and USA. Andrey graduated with top honors from the Royal Academy of Music.

Andrey also devotes much of his time to composition. His pieces have been performed in more than 60 countries from Malaysia to Bermuda. He composed a chamber ballet for the Bolshoi Theatre project, his woodwind quintet has become a standard repertoire piece for already more than 50 quintets all over the world including the Berlin Philharmonic Wind Quintet. Andrey got several commissions from the Russian National Orchestra and State Chamber Orchestra of Russia, Violin Concerto was performed by Julia Fischer with Academy of St Martin in the Fields as well as Strings of Bayerischen Rundfunks.