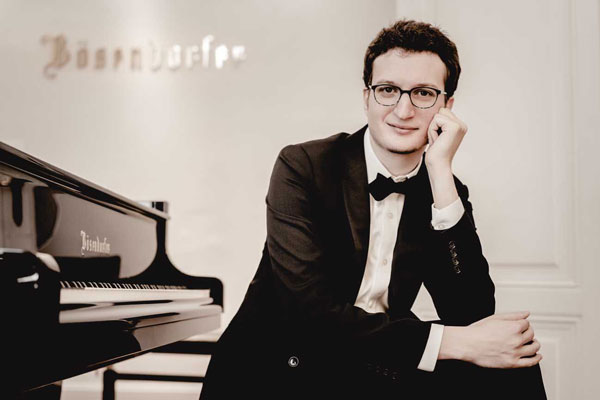 Twenty-six-year old pianist Rodolfo Leone has already amassed a list of major international performances and was the First Prize winner at the Fifteenth International Beethoven Piano Competition Vienna in 2017.

In his Winner’s Recital at Lambach Abbey in June 2017, a reviewer observed, “... he seemed to be communicating with distant worlds, as a true sound philosopher” (Oberösterreichische Nachrichten). His playing has been described as having “impeccable style” and “absolute technical control” with “hands that every pianist would like to have” (Il Nuovo Amico). A native of Turin, Italy, he plays with “a maturity and awareness that usually develops at a later age” (L’Eco di Bergamo) and has appeared in major concert halls from Los Angeles to China.

Leone has performed extensively throughout Europe, North America, and China. These performances include debuts in venues including the Musikverein in Vienna, Austria; Steinway Hall in London, U.K.; the Music Hall of the National Centre for the Performing Arts in Beijing, China; Politeama Theatre in Palermo, Italy; the Mozart Concert Hall of Accademia Filarmonica in Bologna, Italy; the BASF Gesellschaftshaus in Ludwigshafen, Germany; and the Koerner Hall in Toronto, Canada.

His performances have been broadcast live from Vienna, Austria, on Radio Ö1 in Berlin, Germany, on Deutschlandradio Kultur, and on Radio Rai and RaiTRE TV from Bolzano, Italy. A top-prize winner of several major piano competitions, Leone was awarded second prize at the 2014 Toronto International Piano Competition and second prize at the 2013 Busoni International Piano Competition, where first prize was not awarded. Leone received a Master’s of Music from the Colburn Conservatory of Music in Los Angeles, California, where he continues to study with Fabio Bidini. He previously studied at the Hanns Eisler School of Music in Berlin, Germany and at the G. Rossini Conservatory in Pesaro, Italy.