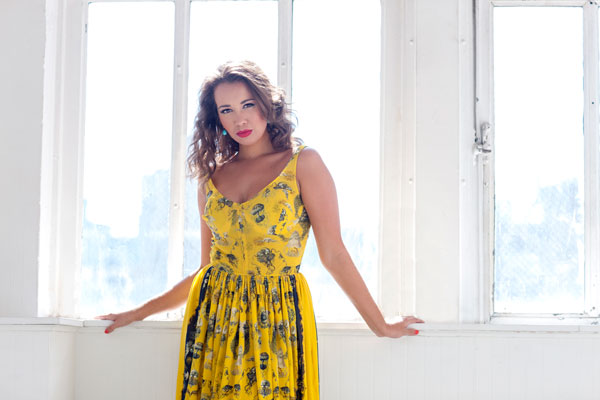 Praised for her vocal beauty, seamless technique, and abundant musicality, Nadine Sierra is being hailed as one of the most promising new talents in opera today. This season, she was named the Richard Tucker Award Winner, a prestigious award given to American opera singers on the verge of a major international career. Having made a string of successful debuts recently at The Metropolitan Opera, La Scala, Paris, and Berlin State Operas, she is quickly on her way to becoming a fixture at many of the world’s top houses.

Her 2017-2018 season includes Susanna in Le nozze di Figaro at the Metropolitan Opera, Nannetta in Falstaff at the Staatsoper Berlin, a concert tour with Andrea Bocelli, solo recitals at The Dallas Opera and The Park Avenue Armory, and Norina in Don Pasquale at the Opéra National de Paris.

In 2016-17, Sierra returned to the Paris Opera, where she debuted as Zerlina in Don Giovanni and sang the role of Flavia in a new production of Cavalli’s Eliogabalo. Shortly after, she performed at the Opéra Bastille as Pamina in Die Zauberflöte and Gilda in Rigoletto.

Following a breakout Metropolitan Opera debut as Gilda in 2015, she sang Zerlina at the house in the fall of 2016, followed by both her role and Live in HD debuts as Ilia in Mozart’s Idomeneo under the baton of James Levine. Highlights of the 2016 summer season included debuts with Lincoln Center’s Mostly Mozart Festival on its opening night program, titled The Illuminated Heart, and with the Boston Symphony Orchestra at Tanglewood.

Sierra made her professional debut as a teenager with the Palm Beach Opera in her native south Florida, and received her first national exposure at age fifteen, when she sang Puccini’s “O mio babbino caro” on NPR’s young artist showcase From the Top. After graduating from New York’s Mannes College of Music, she entered the Adler Fellowship Program at San Francisco Opera, where she made her company debut in 2011, creating the dual roles of Juliet and Barbara opposite Thomas Hampson in the world premiere production of Christopher Theofanidis’s Heart of a Soldier. Appearances soon followed with the Boston Lyric Opera, Atlanta Opera, Seattle Opera, Florida Grand Opera, Glimmerglass Opera Festival, Israeli Opera, and Teatro Lirico di Cagliari.

Other notable engagements from recent seasons include Norina in Don Pasquale and Tytania in A Midsummer Night’s Dream at the Palau de les Arts Reina Sofia in Valencia, Gilda at the Teatro di San Carlo in Naples, and Lucia at the Teatro Massimo in Palermo and at La Fenice in Venice. Sierra’s La Scala debut in 2016 as Gilda, opposite Leo Nucci as Rigoletto, made headlines when on opening night, they were prompted by the audience to encore the duet, breaking with a La Scala tradition dating back to Toscanini prohibiting encores. The vehicle for Sierra’s Berlin State Opera debut was Amor in a new Festtage-opening production of Gluck’s Orfeo ed Euridice, directed by Jürgen Flimm with sets designed by Frank Gehry and led by Daniel Barenboim. The soprano continues to make frequent appearances with the San Francisco Opera, where she has performed in La bohème, Le nozze di Figaro, Die Zauberflöte, and Lucia di Lammermoor.

On the concert stage, Sierra has joined the Cleveland Orchestra in both Cleveland and Miami; sung with the San Francisco Symphony under Michael Tilson Thomas; and performed at the Arena di Verona, Vienna’s Musikverein, and at the Ravinia Festival, conducted by James Levine. She has also been featured in televised concerts from Venice’s Teatro la Fenice for the Concerto di Capodanno, from Lincoln Center as part of the Richard Tucker Gala, and from Paris as part of the televised “Concert de Paris,” under the baton of Valery Gergiev. In recital, the soprano has appeared at venues ranging from Carnegie’s Weill Hall to the Opéra Garnier to the U.S. Supreme Court, where she performed alongside both Joseph Calleja and Thomas Hampson.

In 2007 and 2009 respectively, Sierra became the youngest winner to date of both the Marilyn Horne Foundation Vocal Competition and the Metropolitan Opera National Council Auditions, as recounted by Nick Romeo in his book Driven: Six Incredible Musical Journeys (2011), a chapter of which is devoted to Sierra’s Grand Finals triumph. In 2010, she also took home first prizes at the George London Competition, Gerda Lissner Foundation International Competition, and Loren L. Zachary Society Vocal Competition and was a recipient of a Richard Tucker Music Foundation Study Grant. In 2013, she placed first at the Neue Stimmen, Caballé, and Dunne International Singing Competitions and won a Richard Tucker Music Foundation Career Grant. She has been featured in Vogue, Nylon, Bon Appétit, Opera News, and Elle, as well as on the cover of Classical Singer magazine. She currently resides in New York City, and recently signed an exclusive recording contract with Deutsche Grammophon/Universal Music. You can follow her on instagram @nadine.sierra.