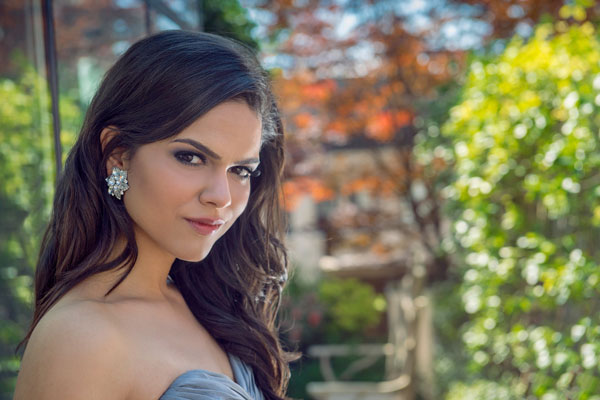 Highly praised for her warm quality of voice and unique timbre, soprano Larisa Martínez has established a strong and unique presence in the classical performance world. She made her operatic debut in 2010 as Luisa Fernanda in the eponymous zarzuela, presented at the Centro de Belles Artes de Puerto Rico. In New York she sang Corinna in Rossini’s “Il Viaggio a Reims,” earning the plaudits of Fred Cohen from Opera News, who wrote, “Ms. Martínez cut an elegant figure, the grace of her stage deportment matched that of her singing.” She also earned raves from Roark Littlefield for Musetta in Loft Opera’s critically acclaimed production of La Bohème in 2014: “As Musetta, Larisa Martínez is delightful, embodying every nuance of that infamously charismatic character.” She was also lauded for her roles of Fire/Rossignol from L’enfant et les Sortilèges and Rosario in Granado’s Goyescas with Bare Opera, a new alternative company in NYC.

In July 2016, she created the role of Isaura in the world premiere of Mercadante’s Francesca da Rimini conducted by Fabio Luisi in Martina Franca, Italy. Other roles in her repertoire include Gilda, Juliette, Adina, Norina, Susanna, Giulietta, and Lucía di Lammermoor.

Martínez is a winner of the Metropolitan Opera National Council Audition PR district 2016, where she also received the Angel Ramos Foundation Award and the Audience Prize. She studied at the Music Conservatory of Puerto Rico, all the while earning a bachelor’s degree with high honors in Environmental Sciences from the University of Puerto Rico. She holds a master’s degree from Mannes the New School for Music in New York City.

An avid recitalist with a passion for art song and theater, Martínez has been showcased at the American Songbook with Michael Feinstein, Lyric Chamber Music Society and Music Talks Series in New York, the Savannah Voice Festival, Bay View Music Festival in Michigan, and internationally with the Franz Schubert Society in Austria and L’Art du Chant Francais across southern France. Her concert appearances include Mahler’s Symphony No.4, Mozart’s Requiem in D minor, and a “Voci di Domani” concert presented by Renata Scotto and recorded by Euroclassics in Rome, Italy. She can also be seen in a crossover project collaborating with Grammy Award-winning violinist Joshua Bell, on the Christmas special Joshua Bell and Friends online through Medici TV and WQXR and on the Live from Lincoln Center Joshua Bell: Seasons of Cuba PBS broadcast.

Martínez is a proud artistic resident of Turn Around Arts, a philanthropic organization led by the President’s Committee on the Arts and the Humanities, which includes such varied artists as Yo-Yo-Ma, Sarah Jessica Parker, and Josh Groban to name a few, for the advancement of arts education throughout the nation. As such, in 2016, she traveled to Cuba as part of the artistic delegation sent by Barack Obama to expand cultural collaboration and bonds of friendship between the two countries.