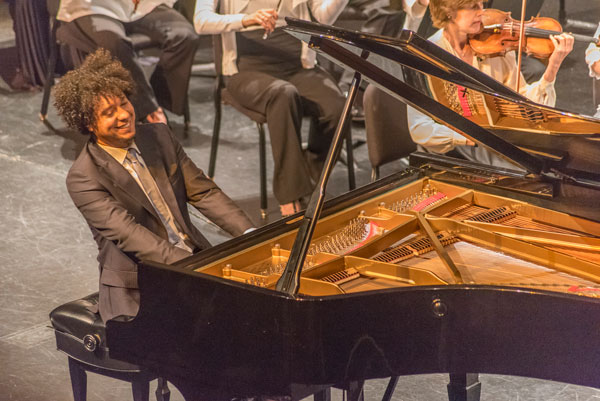 Aldo López-Gavilán was born in Cuba to a family of internationally acclaimed classical musicians. His first international triumph was at the age of 11, when he won the Danny Kaye International Children’s Award, organized by UNICEF. He made his professional debut at the age of 12 with the Matanzas Symphony Orchestra. Parallel to his classical abilities, López-Gavilán developed remarkable improvisational skills. He was invited to perform in the world-famous Havana Jazz Festival with legend Chucho Valdés, who called López-Gavilán “simply a genius, a star.”

In 1999, he recorded his first CD, En el ocaso de la hormiga y el elefante, which won the 2000 Grand Prix at Cubadisco. He was also invited by Claudio Abbado to perform as soloist in a special concert dedicated to the 250th anniversary of Mozart’s birth, in which he was accompanied by the Simón Bolívar Youth Orchestra of Venezuela. The following year, Abbado invited him to perform Prokofiev’s Concerto No. 1 in Caracas and Havana. López-Gavilán’s remarkable professional career also includes composing original music for award winning films, arranging his own compositions for international orchestras as well as performing in some of the most prestigious music venues of the world, such as Carnegie Hall.