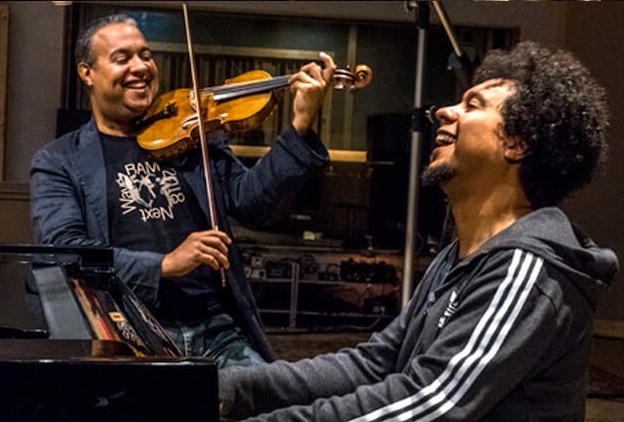 Springboard Events to Feature Live Music, a Film Screening, and an Inspiring Concert for Kids

The renowned virtuoso brothers, born in Havana, have long been separated by geopolitics, only recently reuniting to fulfill their dream of performing together.  Kicking off Springboard and commemorating the release of their first album together, the brothers will perform an electrifying concert of Aldo’s original compositions.  Additional 2019 Springboard events include a concert for Camille Creek Community School students and a private preview of a powerful upcoming feature length documentary about the brothers’ musical journeys, Los Hermanos/The Brothers.

“We are honored to have Aldo and Ilmar bring their incomparable talent to our Springboard series,” said Richard Walker, Festival Napa Valley President & CEO. “At a time when there is so much division and conflict in the world, having Aldo and Ilmar perform together in Napa Valley and share their dynamic story demonstrates music’s power to transcend borders.”

Drawing from a range of colors that include Middle Eastern, Irish and Brazilian sonorities, Aldo's compositions weave a layered tapestry described as magical, optimistic, and at its core, deeply soulful. Tickets available here for $25.

Following the concert, invited guests will join the brothers for a Patron Dinner at the famed Auberge du Soleil terrace where they will dine on Executive Chef Robert Curry’s innovative, seasonal culinary artistry and enjoy a selection of wines from Sinegal Estate Winery and Castellucci Napa Valley.

Aldo and Ilmar bring their unforgettable sounds to Festival Napa Valley’s first Concert for Kids of the season. The brothers will perform for the students of Camille Creek Community School, whose mission is to empower Napa’s most disenfranchised youth toward a productive future through restorative relationships, individualized instruction and inspiring opportunities for growth. This concert is a Festival Napa Valley Arts for All Program.

Festival Napa Valley hosts a private work-in-progress preview of Los Hermanos/The Brothers, a powerful new documentary about Cuban brothers Aldo López-Gavilán and Ilmar Gavilán. Classical violinist Ilmar was a teenager when he left Cuba in the 1980s to perform with orchestras in Moscow, Spain, Los Angeles, and finally New York. His younger brother Aldo, a child prodigy and virtuoso classical and jazz pianist, chose to make his life on the island nation he loved. Both men soared in their careers. Restrained by embargoes, travel bans, and finances, the brothers rarely saw each other and shelved their aspirations of playing together professionally. Then in 2015 a diplomatic thaw made their dream a reality.

Los Hermanos/The Brothers tracks Ilmar and Aldo’s parallel lives, heartfelt reunion, and momentous performances together on stages in Cuba and across the U.S. This captivating film offers a nuanced, often startling view of estranged nations through the lens of their music, and an intensely moving, personal perspective on an unending geopolitical conflict whose next stage remains unknown.

This invitation-only screening is followed by a performance featuring the film’s two stars, Aldo and Ilmar, a Q&A with directors Marcia Jarmel and Ken Schneider of PatchWorks Films, and an elegant reception.